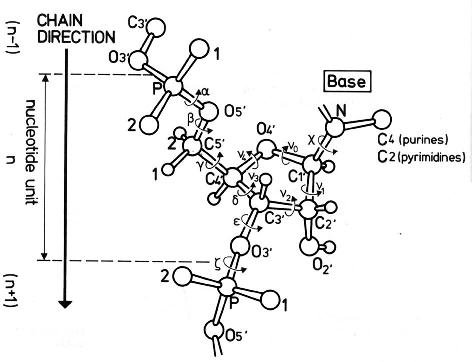 Delta is the torsion angle about the C4'-C3' bond. Delta is correlated with the sugar pucker phase angle (see 2. Sugar pucker).

The differing conformations of the ribose have been named with respect to that ring atom which puckers out of the plane given by the other ring atoms. The most prominent conformations are C2'-endo in B-helices and C3'-endo in A-helices. At room temperature both conformers are in a dynamic equilibrium. Transitions occur via the O4'-endo state. Intermediates between C2'-endo and C3'-endo are found in several (time-averaged) structures obtained from X-ray crystallography or NMR. When changing the pucker phase angle from 0° to 360° we step through all possible conformations of the ribose ring. This pseudo-rotation cycle can be depicted as a conformational wheel (Figure 3).

Table 1. Ranges of the sugar pucker phase angle for all conformations of ribose.

The typical energy profile for rotation about the glycosidic bond of a desoxyribonucleotide in Figure 4. It turns out that the energy minimum of the anti conformation is located at -140° and the minimum of the syn conformation at +30°. In addition, there is a third minimum at -60°. The range between -110° and -60° is termed high anti. The high anti range is often populated in duplex structures.

The glycosidic torsion angle chi is correlated with sugar puckering. High anti is often found with C2'-endo sugars (B-helix), while C3'-endo sugars (A-helix) are associated with more canonical anti values in the range from -150° to -180°.